The University of Seville 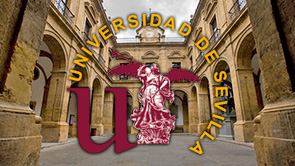 Info about the University of Seville

For street maps and route itineraries visit the ViaMichelin or Google Maps.

Sevilla has one of the most used railway stations in Spain, named Santa Justa. This station has high-

speed train (AVE) that connects southern Spain with northern Spain. In addition, the city of Seville has direct connection with Madrid (capital of Spain) through a high-speed railway line. Alta Velocidad Española (AVE) is a service of high-speed rail in Spain operated by Renfe, the Spanish national railway company, at speeds of up to 310 km/h (193 mph). The name is literally translated from Spanish “Alta Velocidad Españolas” (Spanish High Speed), but its initials are also a play on the word ave, meaning “bird”. As of December 2011, the Spanish AVE system is the longest HSR network in Europe with 2,665 km (1,656 mi) and the second in the world, after China.

The journey between Seville and Madrid on AVE has a duration of 2 hour 20 minute.

Train timetables are available online at the Renfe website.

Seville has an airport named San Pablo Airport. Seville Airport is the main airport for Seville in southern Spain. The airport handled over 4,500,392 passengers and just under over 8,000 tonnes of cargo in 2011. It has one terminal and one runway and serves as base for the low cost carriers Vueling and Ryanair. Taxis and regular bus services run between Seville and San Pablo Airport. A one-way taxi fare from Seville airport to the city center cost  between 25-35 euro.